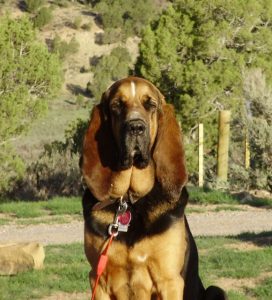 Millie spent the first 2 1/2 years of her life in a small backyard in Texas.  She never went for a walk, had no rules or manners and was 40 pounds overweight. When she accidentally knocked down the elderly woman who owned her, it was decided that she was “too much” dog and she was  placed on the bloodhound rescue website. That’s when we saw her picture and decided to give her a new home. Once she tried searching for people who were hiding for her, she had a new job, which gave her tremendous energy and a new purpose! She shed the weight, had a lot more energy and looked and acted like a pup! Those long ears and all her wrinkles sometimes make it hard to take her seriously, but when that nose was down on the ground and she was trailing someone, she was doing what she was born to do and a thrill to watch!