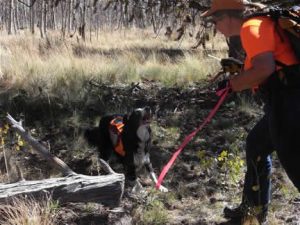 Toss began his SAR career at the age of 8 weeks.  He was a 38 lb. Border Collie from sheep trialing parents and registered with the American Border Collie Association (ABCA). His real name was Toisgeal, which is a Scottish word meaning “the reward for finding something lost”, but he preferred to be called Toss. Toss was whistle and hand-signal trained to help cover a search area effectively. Toss’s favorite rewards were playing tug-of-war or catching bubbles.

Toss lost his battle with cancer on 12/05/15.  He fielded on many missions across the state with SARDOC, as well as in his home county with Larimer County SAR.