Certified in Air Scent and Avalanche 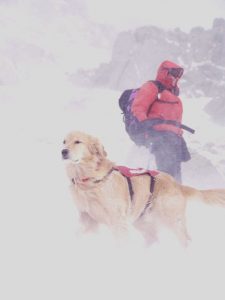 Sandy was certified in Air Scent and Avalanche and had a working career of nearly 12 years.  The cancer that had plagued him beginning at 6 years of age finally took him during his final search at 12 years of age.  He is credited with finding a number of people and was a wonderful ambassador for SAR Dogs.  He was born the same day that Sandy Sigman died, 7/9/94, while doing a helicopter evacuation of an injured person on Mount Huron.  To quote Sandy, “Never say never” – they both had that same attitude.